Dublin Zoo is delighted to announce the birth of a southern white rhinoceros calf named by the public as Tadala. The male calf, yet to be named, was born to proud mother Nyala and father Chaka on Sunday, 12th November and weighs approximately 50kgs.

The youngster is Nyala’s first calf and the birth marks another significant success for Dublin Zoo as part of the European Endangered Species Programme, established to assist the survival of the southern white rhinoceros.

The newest member of the herd now joins Sam, Reni, Chaka, Zanta, Nyala, Ashanti and Zuko (born at Dublin Zoo in 2016) in the African Plains and is settling in extremely well. Lucky visitors will be able to get a glimpse of mother and calf by looking through the window into the Rhinoceros House.

It is estimated that 20,000 of these animals exist in the wild and the majority are found in South Africa, Zimbabwe, Namibia and Kenya. Poaching for rhino horn is the most significant threat to the wild population.

Dublin Zoo financially supports the conservation organisation Lowveld Rhino Trust, who are based in Zimbabwe and help protect rhinos from poachers.

Helen Clarke-Bennet, team leader of the African Plains said: “We are absolutely thrilled to welcome another southern white rhinoceros calf to Dublin Zoo. The newest addition to the herd is Nyala’s first calf, which is very special and she has taken to motherhood extremely well. The calf is healthy, strong, feeding well and full of life already!” 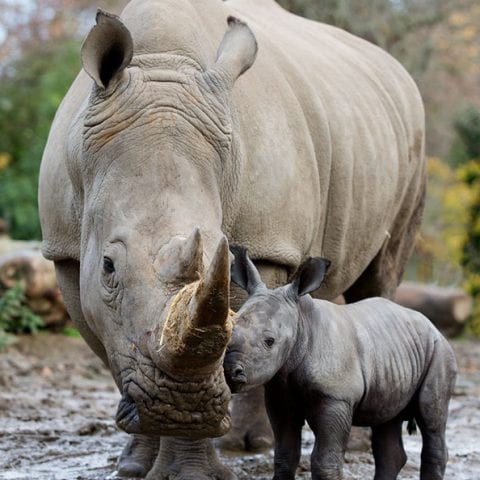