The Zoo, this Sunday

Want to see more of these beautiful Sulawesi crested macaques? Join us this Sunday, 7.30pm on RTÉ One.

Sandra Molloy, Registrar/Research and Conservation Coordinator at Dublin Zoo, made a once-in-a lifetime trip to visit the Selamatkan Yaki conservation team and met some the macaque monkeys along the way too.

Sandra kept the following diary of her visit to Sulawesi, Indonesia in 2017.

One of the main causes of this species’ decline is capture for meat and for the pet-trade. Highlighting that yaki are only found in this small part of the world gives local communities a sense of responsibility towards their survival. In addition, not everyone is aware that the species is protected.

Selamatkan Yaki has several examples of students persuading their families to stop hunting and eating yaki, and reporting yaki being kept as pets. Selamatkan Yaki also recruits ‘Yaki ambassadors’, who are students selected from high schools in northern Sulawesi, to help spread these three core messages. I met several of these ambassadors and they were extremely passionate about their role. Two of them are starting university later in the year and will continue spreading these messages in university.

The market in Tomohon City is huge and consists of rows of stalls selling brightly coloured flowers, fresh fruit and vegetables, homeware, seafood and meat. It is the meat section of the market where Selamatkan Yaki concentrates its efforts.

We arrive mid-morning and the market is packed. All around us in the meat section are rows of various types of meat ranging from pork, cat and dog to bush-meat (meat from wild animals).

Fortunately, there are no yaki or other protected species openly for sale (it is illegal to sell protected species). However, one of the main causes for the yaki’s decline is capture for meat.

Selamatkan Yaki makes regular visits to markets to check if it is being sold but also to meet with market sellers and buyers and highlight the three core messages. Selamatkan Yaki also sets up its own colourful stall with activities for kids, giving the team an opportunity to speak to parents.

I was very impressed with the positivity of the Selamatkan Yaki team and their ability to engage different groups. They struck up a conversation with the head of the meat section of the market and explained their conservation objectives. He was really enthusiastic about their work and suggested providing sellers with a special identity card highlighting that they do not sell illegal bush-meat. While illegal bush-meat is often not openly for sale, it can still be purchased ‘under the table’. 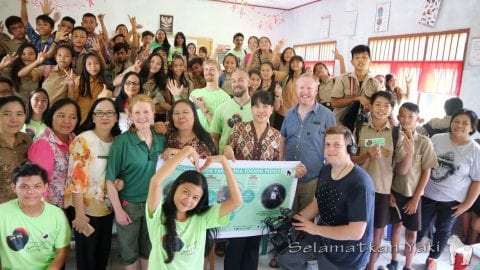 At dawn, we head into Tangkoko Nature Reserve, which is home to the largest population of wild yaki. Within half an hour of entering the reserve, we come across a lone male on the path. An hour later and deeper into the forest, we observe a family group of about 30 yaki. We maintain a respectful distance and spend the next few hours watching the antics of this constantly roaming group. We watch them feed and fill their cheek patches with an assortment of fruits, observe minor scuffles and see a mother and her young baby rest in a shaft of sunlight streaming through the canopy. On our way out of the forest, drumming sounds alert us to the presence of ashy woodpeckers. Close to the woodpeckers, we spot three bearcuscuses, which are tree-dwelling marsupials.

We return to Tangkoko Nature Reserve later that evening and arrive at a tarsier sleeping tree slightly before nightfall. Tarsiers are one of the smallest primates in the world.

They are nocturnal and have huge eyes to help them see at night. Waiting patiently, we observe five tarsiers awaken, emerge slowly from their sleeping tree and disappear into the night to hunt for insects and lizards. What a truly wonderful day being immersed in the wild life of this very special nature reserve.

Selamatkan Yaki is constantly working with relevant groups to protect the yaki. On this morning, I helped with English lessons for the guides of Tangkoko Nature Reserve, which are delivered by Selamatkan Yaki. The guides, from the surrounding villages, are a vital part of the team protecting Tangkoko National Park and the yaki.

That afternoon, we drive to Tasikoki Wildlife Rescue Centre in nearby Bitung City. Selamatkan Yaki has organised a meeting with the village representatives around Tangkoko Nature Reserve and forestry officials to design a strategy for the nature reserve for the following year. These meetings occur regularly and enable all those connected to the reserve to be part of the plan for its future.

The day ends with a visit to the house of the mayor of Bitung City. The mayor’s wife is a Yaki ambassador and is very active at promoting conservation at government level.

We begin the day with a guided tour from the manager of Tasikoki Wildlife Rescue Centre, which is home to hundreds of rescued animals, including over 100 macaques of five different species (in total there are seven species of macaque which can be found on Sulawesi). Many of these macaques have been rescued from the pet-trade and arrived in terrible condition. The Centre hopes to return many of these to the wild but disease, lack of funding and red-tape are major issues.

Our visit to Sulawesi ends with an invite to the government buildings in Bitung where the mayor, his wife and Selamatkan Yaki are speaking to the regional officials about the yaki and the need to conserve it. The mayor ends by highlighting that Dublin Zoo has come all the way from Ireland to see the wonderful yaki and that it is vital that all his officials are proactive in protecting the yaki and its habitat.

Although sad to leave Sulawesi, I am happy in the knowledge that Dublin Zoo is helping to protect the yaki by supporting the fantastic Selamatkan Yaki and all the work they do.