Dublin Zoo was opened by the Zoological Society of Ireland in 1831 on four acres of land in the Phoenix Park.  The early collections included monkeys, lions, leopards, bears and parrots.  In 1835, the zoo rented an elephant and a rhinoceros for the summer months.  In 1836, London Zoo gave Dublin an elephant.  Enclosures were rudimentary, designed for containment and to provide visitors with a good view of the animal.  The iconic thatched entrance was built in 1833.

Members of the Zoological Society ran the zoo on a voluntary basis and faced many challenges.  They were entirely reliant on visitor entry fees and membership subscriptions. Initially, the zoo was open to society members, their friends and anyone who could afford the entrance fee of six pence. In 1840, the society decided to open the zoo on Sundays for a penny.  Dubliners responded with enthusiasm and cheap entry was extended to public holidays and evenings. In 1854 the society was given an annual government grant; it was small but put the zoo on a steady footing.  A year later, a pair of lions was purchased.  They first bred in 1857, so starting the lucrative Irish Lion Industry. Over the following 100 years, Dublin Zoo’s lions were sought after by zoos and dealers around the world because they were strong and healthy.  It is possible that the first MGM lion was born in Dublin in 1919.

In the 1860s, under the wily direction of the society’s honorary secretary, Reverend Professor Samuel Haughton, the zoo extended its boundaries to encompass the lake.  Permanent structures were built with capital grants, including a monkey house, an aquarium, a lion house, and Society House.  The collection grew and the expertise of the keepers developed.  In 1885, for example, the zoo received an orangutan in exchange for four lion cubs. Under the care of Patrick Supple, the orangutan lived for nearly four years, which was a major achievement for the time.

The first half of the twentieth century was one of mixed fortunes.  It began with a golden period when Irish people serving in British colonies sent giraffe, baboons, snow leopards and other exotic animals to Dublin Zoo. At the outbreak of the First World War, the society was particularly proud to have a gorilla, a chimpanzee, an orangutan and a gibbon in the collection. The zoo struggled through the war years with help from society members, who used personal funds to keep it going.  Remarkably, the zoo became immensely popular during and after the Second World War.  Although the size of the animal collection fell, and food, fuel and replacement animals were difficult to acquire, visitor numbers grew from 173,000 in 1939 to 343,000 in 1950.  At the same time, tickets for fund-raising breakfasts, dinners and dances were in such demand that people joined the society in order to obtain them.

In the 1950s and 60s, many animals became readily available on the open market and Dublin Zoo acquired rhinoceros, hippopotamus and giraffe, all of which bred.  Elephant rides, chimpanzee tea parties, lion feeding time, pets’ corner and pony rides were among some of the activities laid on for visitors.  The zoo became the place for birthday parties and First Communion celebrations, and in spring and early summer, school groups arrived by the busload.

But the international zoo world was changing.  Zoo professionals, now meeting regularly to discuss major issues, were turning the focus from simple display of multiple species to conservation and education.  From the 1970s onwards, buying and selling animals gradually ceased.  Stud book keepers were appointed to manage a species across zoos, including breeding and establishing standards for animal care and husbandry.  Containment was no longer enough; animal habitats in zoos needed to support and promote the natural instincts and social groupings of animals, and promote informal education.

By the 1980s, Dublin Zoo did not have the resources to keep up with the changes being implemented in major zoos around the world.  As visitor numbers dwindled and gate receipts went down, the zoo was on the point of closure in 1990.  It was saved by a groundswell of public support followed by government aid.  The infrastructure was overhauled and animal enclosures were improved.  In 1997, incoming president, Mary McAleese, granted the society use of the land and a lake formerly part of Áras an Uachtaráin.

In the early 2000s, the society received capital grants that allowed it to create world class animal habitats and improve visitor facilities.  A master plan was drawn up to create habitats inspired by the wild, to promote conservation breeding programmes and to incorporate strong conservation messages for the general public.  The first ambitious habitat was the Kaziranga Forest Trail for the elephants, opened in 2007.  The complex habitat introduced protected contact for a family group of elephants, which came from Rotterdam Zoo. The extensive use of plants contributed to the immersive experience for visitors. Two elephants, pregnant on arrival, gave birth on deep sand without human intervention.  A bull elephant arrived in 2012 and the herd continued to breed.  Dublin Zoo’s elephant husbandry and habitat have attracted the interest of zoo professionals from all over the world. 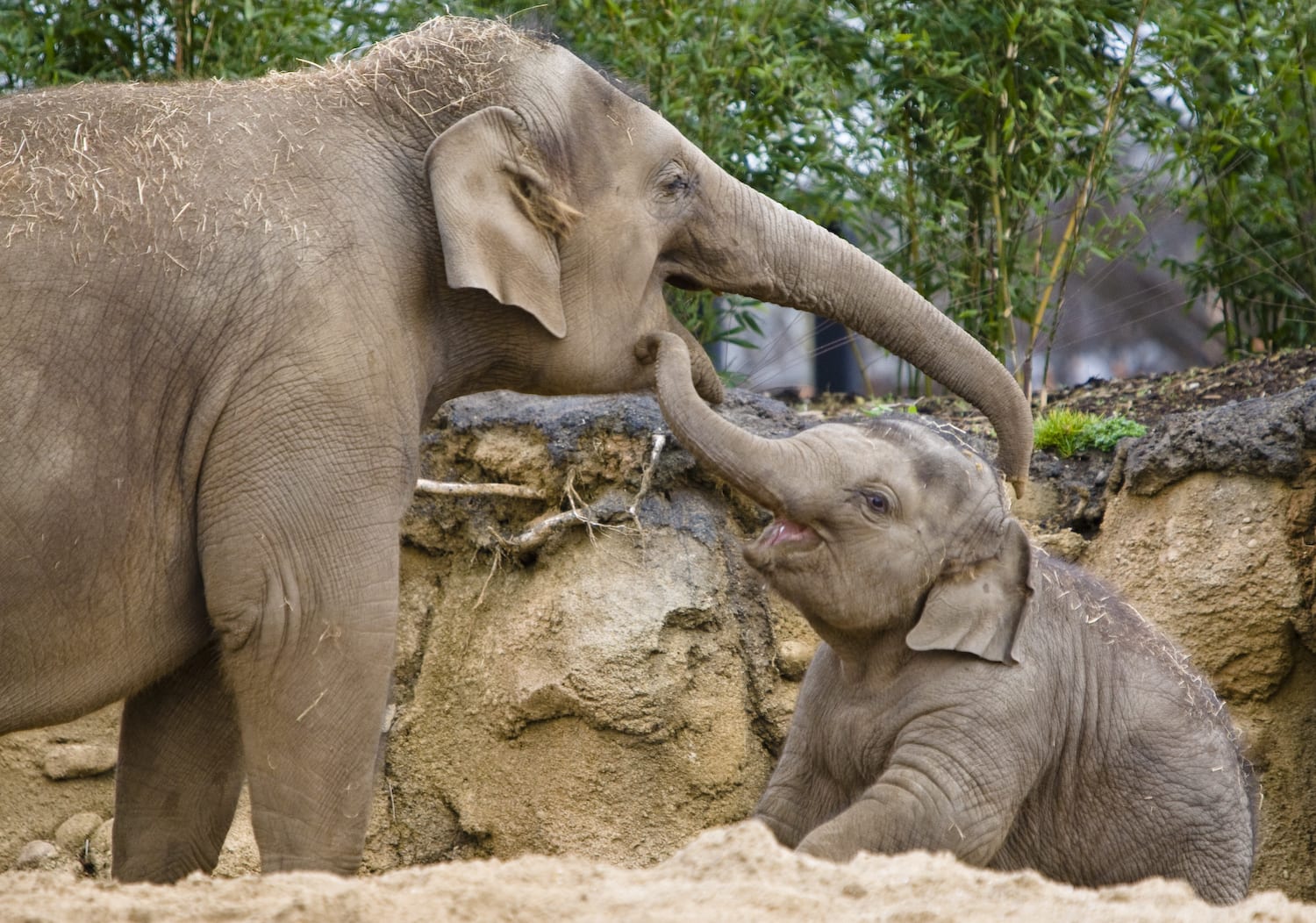 The first elephant calf born at Dublin Zoo, Asha and her mother Bernhardine.

Since then Dublin Zoo’s world-class habitats include the African Savanna, Family Farm, Gorilla Rainforest, Sea Lion Cove and Flamingo Lagoon, the Orangutan Forest, Zoorassic World and Wolves in the Woods.  In 2015, the Gorilla Rainforest was cited by the World Association of Zoos and Aquariums as a fine example of what can be achieved in a zoo.  The conservation message has been skilfully woven into every activity of the zoo with help from a very successful behind-the-scenes television series, skilfully designed education programmes and ethical marketing.  The interest of visitors saw annual visitor figures reach one million in 2011 (in a national population of around five million) and remain well over million each year until 2020 when the Covid pandemic closed the zoo for an extensive period.  However such is the affection and regard of visitors for the zoo, in November 2020 over €2 million was raised within 48 hours on the announcement of a public appeal for help.

Dublin Zoo is still operated as a charity by the Zoological Society of Ireland and is managed by a highly professional team.