Upali the Bull Elephant Has a New Home

The five-tonne Asian elephant was moved in the early morning hours of February 27th from Dublin Zoo, his home since July 2012, to Le Pal Zoo in France. The move was requested by the breeding programme co-ordinator for Asian elephants, said Dublin Zoo’s Sandra Molloy, Registrar/Research and Conservation Coordinator.

“In the wild, bull elephants move between different herds,” said Sandra, so Upali’s move is in keeping with what happens naturally.

The breeding programme is also recommending the move because Upali has produced enough offspring. In the six and a half years he has lived at the Zoo, Upali has fathered seven calves — four males and three females — bringing the number in the herd to 12.

But how exactly do you move an elephant to another country?

Of course, safely moving a 24-year-old bull elephant weighing 5,000kg and standing a little more than three metres tall to France took great effort. His 30-hour journey by lorry and ferry across the Irish Sea and the English Channel required a lot of planning, coordinating and training by the animal care team.

Preparation for Upali’s move started several months ago with daily training so that he would become familiar with the huge crate in which he travelled. The metal crate alone weighed 6,000kg and measured 6 metres long by 2.5 metres wide by 3.5 metres high.

Gerry Creighton, Operations Manager of Animals and Grounds, said Upali (pronounced UP-a-lee) was trained to walk in and out of the crate on a daily basis.

“When he comes to the crate, he gets special food like melons and whole bananas and that only happens at that particular time,” he said, so they’re associated with the crate. “It’s a rewards-based training system that we use.” 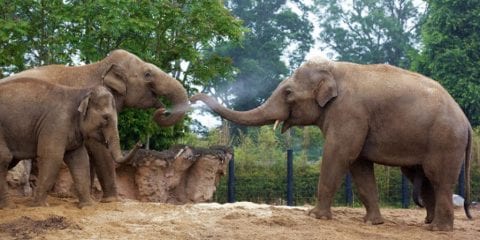 A keeper from Dublin Zoo visited Le Pal Zoo to see where Upali would be living and to tell keepers there about Upali’s personality and habits. Likewise, a member of the animal care team from Le Pal visited Dublin Zoo and spent time with Upali to get to know him.

A sample of Upali’s dung was sent to Le Pal Zoo so that the three adult female elephants and one young male elephant there would become familiar with it. The idea is to give the Le Pal elephants as much information as possible so that they are not stressed in any way. 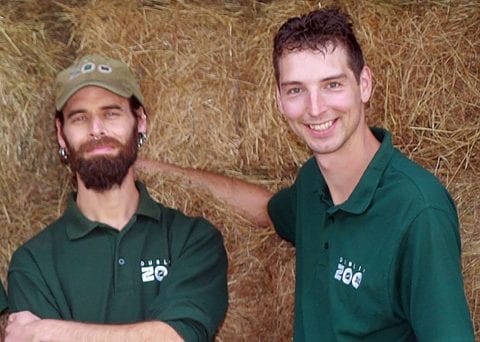 Donal Lynch and Raymond Mentzel travelled with Upali from Dublin Zoo to Le Pal Zoo in France to ensure a smooth and seamless journey!

12:00am Alarm clock goes off and a short time later both keepers leave their homes and travel to Dublin Zoo to start their day!

1am: We meet at the Zoo with rest of elephant care team along with crane drivers, builders and the veterinary team – there are 12 people there in total.

1:45am: We complete the briefing of who handles the various tasks throughout the day.

2am: Upali is prepared to enter crate with the same training he has been preparing for.

2:40am: Upali is now in the crate, given his favourite treats of melons and bananas as a reward.

3am: The crate is ready to be lifted and the box is secured.

3:30am: The multi-tonne crane lifts Upali in crate onto lorry.

4am:  The crate is secured on the lorry.

5:30am: The lorry leaves Dublin Zoo and travels down the Quays to Dublin Port.

8:10am:  We’re on our way – the ferry leaves Dublin for Holyhead, England.

11:30am: The lorry with Upali in crate leaves the ferry to drive across England to Portsmouth.

10pm: Our next ferry awaits – so the lorry boards Portsmouth ferry.

6am: Another early start, the ferry arrives in Cherbourg, France.

4pm: We finally arrive at our destination – the lorry with Upali in crate arrives at Le Pal Zoo.

5pm: Upali walks out of crate and into his new elephant house. He is calm and relaxed and shows positive interest in his new habitat.

10:30am: Upali is introduced to female elephants at Le Pal and it goes really well!

1pm: We say our goodbyes to Upali and then head to the airport to start our journey home! We’re delighted that everything went to plan and our months of preparation for this trip went seamlessly.