There are currently over 170 Bornean orangutans in almost 40 zoos in the European breeding population (EEP). It is vital that this population is self-sustaining, i.e., that enough babies are born each year to replace orangutans that die. However, placing a male with a female in a zoo does not mean they will breed. In fact, mate choice is an important factor; animals housed in a breeding situation with their preferred partner have an increased chance of having healthy babies. 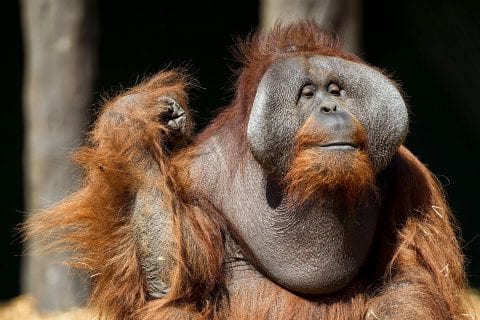 Photos of the male orangutan at Dublin Zoo, Sibu, who will be shown to female orangutans as part of this project.

Bornean orangutans are listed as Critically Endangered by the International Union for the Conservation of Nature and Natural Resources (IUCN) Red List. The Bornean orangutan wild population is estimated to have decreased by at least 100,000 individuals between 1999 and 2015. The zoo populations of Bornean orangutans, therefore, act as important insurance populations while also raising awareness and funding to address the main threats facing their wild counterparts. But, what is the best way to ensure enough babies are born each year to keep these zoo populations self-sustaining?

Moving many orangutans around to different zoos all over Europe is not very feasible, especially for such a large animal. Therefore, the Orangutan EEP has decided to explore other options. A pilot project known as ‘Tinder for orangutans’ was carried out in 2017 and has been further developed into a PhD research project. The student carrying out the research is based at Apenheul Primate Park and Leiden University in the Netherlands with the project being supported by the Orangutan EEP and numerous zoos, including Dublin Zoo. Dublin Zoo is providing funding and images of orangutans necessary for this research. Orangutans in the ‘Tinder’ project are placed in front of a touch-screen tablet and shown images of different orangutans of the opposite sex. An important element of the research is to learn how an orangutan selects a partner and the psychological and physiological reasons behind this choice. The research should also increase our understanding of orangutan emotions, which will have a positive impact on how we care for this amazing species.

Bornean Orangutans – status in the wild 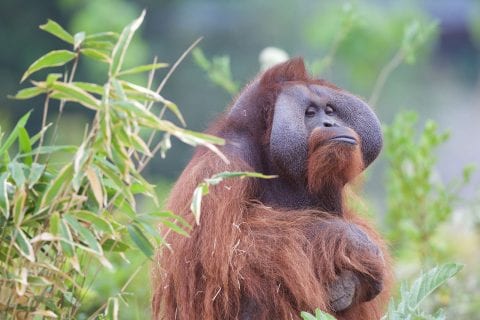 Photos of the male orangutan at Dublin Zoo, Sibu, who will be shown to female orangutans as part of this project.

Check out what Dublin Zoo is doing to support Bornean orangutans in Lamandau, Borneo here.