Information on their lifespan in the wild is unknown. The longest-living Vietnamese pond turtle in a zoo has been 46 years old.

Little is known about their diet in the wild. In zoos, they are omnivores, and feed on fish and vegetables.

A group of turtles is called a "bale"

The closest related species of the Vietnamese pond turtle is the yellow pond turtle.

The Annam leaf turtle had not been observed in the wild by scientists for 65 years between 1941 and 2006.

Their natural habitat in central Vietnam has distinct dry and wet seasons. They have been known to be found in the leaf litter of bamboo trees during the dry season and clinging to tree branches during floods. 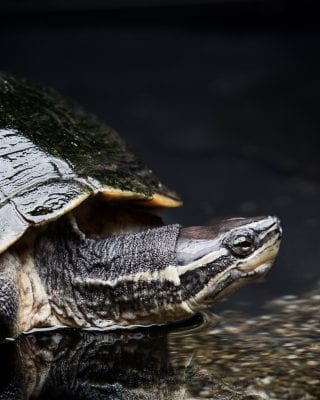 Knowledge about their life in the wild is limited, given how rare they are. In zoos, they tend to respond well to living in groups.

The incubation period is anywhere between 80–131 days depending on the heat of their environment.

Females lay 1-4 clutches of eggs per year with 4-7 eggs per clutch.

The Vietnamese pond turtle is classified as Critically Endangered by the International Union for Conservation of Nature.

Surveying the population of Vietnamese pond turtles has been mostly unsuccessful in recent years, indicating that it is now extremely rare in the wild. It is likely that no more than 50 mature individuals remain in the wild.

The greatest threats to Vietnamese pond turtles are poaching for food, traditional medicine and the pet trade, as well as habitat destruction and pollution.