Tapirs have a flexible snout (made of their upper lip and nose) that they use to detect smells, grasp food and as a snorkel when submerged in water to avoid predators like jaguars.

Tapirs have a flexible snout (made of their upper lip and nose) that they use to detect smells, grasp food and as a snorkel when submerged in water to avoid predators like jaguars.

The South American tapir is generally found living near water in swamp forests, rainforests, shrublands and wetlands across Northern and Central South America.

South American tapirs are herbivores (plant-eaters). They mostly eat leaves and fruits. They use their long prehensile (grasping) snout to reach for food.

Tapirs are usually solitary (live on their own) and don’t have a commonly used group name associated with them.

Beside the great lawn, just after the South American House

The closest relatives of the South American tapir are the other members of the tapir family (Mountain tapir, Baird’s tapir and Malay tapir).

South American tapirs are known for being strong swimmers. They are able to cross rivers and take to the water to escape predators (using their snouts as snorkels to breathe through while hidden underwater).

Tapir calves are born camouflaged. They have brown coats with white spots and stripes which help them blend into the dappled light of their environment and avoid predators. These markings are often compared to looking like a watermelon! The markings gradually fade after a few months and their coats begin to look dark brown like adult tapirs.

Tapirs have been around for 20 million years and haven't changed very much at all. They are considered the most primitive large mammal in the world.

Gardeners of the rainforest

Tapirs are often known as gardeners of the rainforest. This is because the seeds of the fruits they eat are dispersed in their faeces (poo) when they wander from one area to another. Those seeds later sprout and grow into new trees and plants, helping the forest to regenerate.

Tapirs are from the same order, or group of animals, as rhinos, horses and zebras. They are all grouped together because they walk on an odd number of toes. Tapirs have four toes at the front and three at the back. 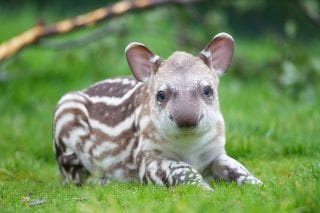 South American tapirs are generally solitary, meaning they live alone except when mating or raising their young. Tapir calves stay with their mothers for 12-18 months and become independent after this. 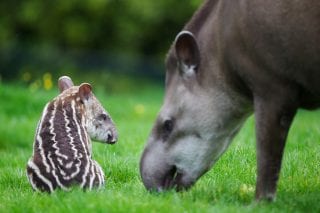 The South American tapir is classified as Vulnerable by the International Union for the Conservation of Nature.

Unknown. Finding and counting the secretive South American tapir in the wild is difficult, so there are no estimates for their population at the moment. However, studies show that their numbers are decreasing.

The main threats to the South American tapir are habitat loss due to deforestation and illegal hunting for meat. 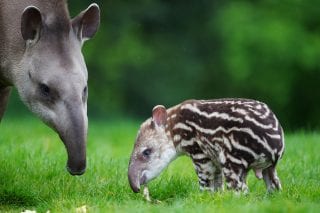