Snow leopards are big cats known for their beautiful silver, white and black fur and green eyes. They have a powerful jaw and thick fur that protects them from the cold. They have short stocky limbs for climbing and extra-large paws that act like snowshoes.  They have a long thick furry tail which they use as a scarf to keep their heads warm in the cold mountainous climates they live in.

Snow leopards are big cats known for their beautiful silver, white and black fur and green eyes. They have a powerful jaw and thick fur that protects them from the cold. They have short stocky limbs for climbing and extra-large paws that act like snowshoes.  They have a long thick furry tail which they use as a scarf to keep their heads warm in the cold mountainous climates they live in.

Snow leopards live in the mountains of Central Asia in countries such as Nepal, Pakistan, China, India, Russia and Mongolia, among others. In the Himalayas, snow leopards are usually found between 3,000 and 5,400 m above sea level. In Mongolia and Russia, they are found at lower altitudes.

Snow leopards are carnivores (meat-eaters). Their main sources of food are the blue sheep (also known as bharal), the Asiatic ibex (a large wild goat), and the argali, a wild mountain sheep. They hunt a large animal approximately every 8-10 days.

Snow leopards are solitary so they do not have a group name.

The closest relative of the snow leopard is the tiger (Panthera tigris).

Snow leopards have extra-large paws that act like snowshoes to keep them from sinking in the snow.

Snow leopards can jump as far as 15 m and can jump 6 m vertically.

Can you hear me?

Unlike the other big cats, snow leopards are unable to roar. Instead, they make a puffing sound called a ‘chuff’. They also make a range of other noises including hisses, growls and mews.

Snow leopards are nomadic and constantly move around their territory to hunt. They also make long treks out of their home ranges and can cover great distances in a short period of time. 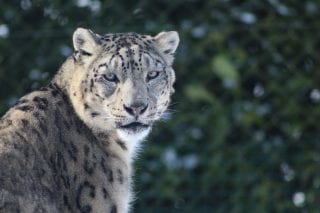 The snow leopard leads a solitary life, only coming together with others to mate. During this time, the male and female will stay together for a few days. The female will give birth in a sheltered den site and raises the cubs on her own. By 2 years old, the cubs become independent of their mother.

The snow leopard is classified as Vulnerable by the International Union for Conservation of Nature.

The IUCN estimates that less than 8,000 individuals are estimated to be living in the wild, scattered across 12 range countries.

Snow leopards sometimes come into conflict with local farmers, when they kill the farmers’ domestic livestock, causing the farmers large economic losses. They also face the threat of poaching for their body parts, as well as habitat loss and fragmentation, climate change and the poaching of the prey that they rely on for food.

In 2009, Dublin Zoo began working with the Snow Leopard Trust. The Snow Leopard Trust was founded in 1981 and is now the leading authority on the study and protection of snow leopards. Their conservation philosophy is based on sound science and research coupled with building community partnerships.

The funding from Dublin Zoo is going towards five on-going, sustainable and community-driven projects in Mongolia. India and Pakistan. 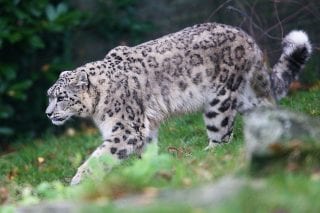