Okapis are a large, hoofed animal related to the giraffe. They have a red-brown, velvety coat and distinctive black and white stripes on their back legs. Like giraffes, okapis have long, dark tongues. Male okapi’s also have ossicones on top of their heads (horn-like structures that are covered in skin and fur)

Okapis are a large, hoofed animal related to the giraffe. They have a red-brown, velvety coat and distinctive black and white stripes on their back legs. Like giraffes, okapis have long, dark tongues. Male okapi’s also have ossicones on top of their heads (horn-like structures that are covered in skin and fur)

Okapis reside in the dense forests of the Democratic Republic of Congo in Africa.

Okapis are herbivores (plant eaters) that eat a diet of leaves, shoots, fruit and fungi. They also eat clay and charcoal (from burnt trees) to help neutralise toxins in plants and to gain minerals.

Okapis are generally solitary - they prefer to live on their own so have no group name. Though they can be found together when mating or when a mother is raising her calf.

Although the black and white stripes on an okapi's back legs are similar to that of a zebra - they are not related to the zebra. The okapi's closest living relatives are giraffes. Okapi are even sometimes referred to as 'forest giraffes'.

An okapi's large ears can swivel around to pick up sounds in the forest.

Okapi mothers hide their newborn calves in one spot under dense vegetation and return to them to nurse. Okapi calves also avoid being found by predators by not defecating (pooping) until they are at least one month old!

The okapi's tongue is long enough to reach its eyes and ears.

An okapi's stripes help break up its body outline, making it hard to spot – so hard that Western scientists didn’t know the species existed until 1901! 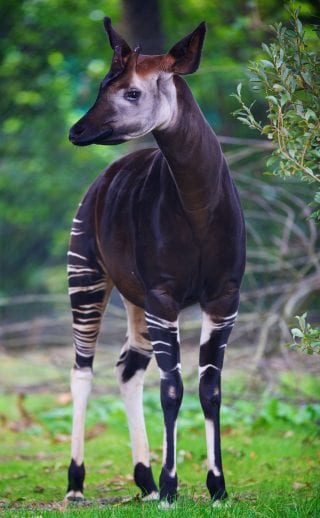 Okapi are mainly diurnal (active during the daytime) and tend to live in their own fixed territories (areas). Okapi are mainly solitary (prefer to live on their own) except when females and males come together to mate and when a mother is looking after its calf. Infant okapis spend most of their time in their nest/hide under the protection of their mother during their first two months. After this time an infant can travel with its mother through the dark rainforest by following her stripes. 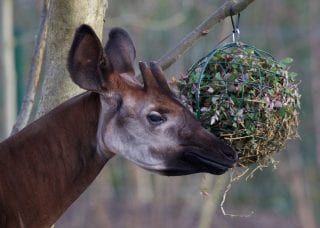 The okapi is listed as Endangered by the International Union for Conservation of Nature due to habitat loss, hunting, deforestation and civil unrest.

Threats to the okapi include habitat loss, hunting, deforestation and civil unrest.

Dublin Zoo is part of an international breeding programme for okapi and also partners with the Okapi Conservation Project in the Democratic Republic of the Congo to help monitor and protect okapi populations. 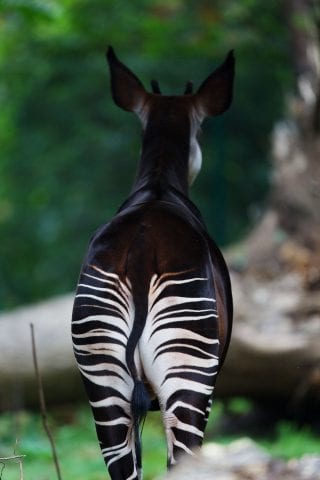