King ratsnakes are black snakes with a yellow stripe-like pattern. The young go through colour and pattern changes which take about two years to complete. King ratsnakes suffocate their prey by constriction.

King ratsnakes are black snakes with a yellow stripe-like pattern. The young go through colour and pattern changes which take about two years to complete. King ratsnakes suffocate their prey by constriction.

King ratsnakes are found in forests and fields in China, Vietnam, Taiwan and Japan.

In the wild, the king ratsnake lives for 15+ years - males living longer than females. In zoos they can live for 20-25 years.

They eat rodents, birds, birds’ eggs, lizards, other snakes and even other members of its own species.

They are solitary so do not have a group name.

The closest relatives of the King ratsnake are the other species of the Elaphe (rat snake) genus.

The King ratsnake is sometimes known as ‘stink snake’ or ‘stinking goddess’ because they give out a strong foul-smelling odour when threatened.

Their common name, King ratsnake comes from the fact that they eat other snakes.

There are three recognised subspecies of King ratsnakes. 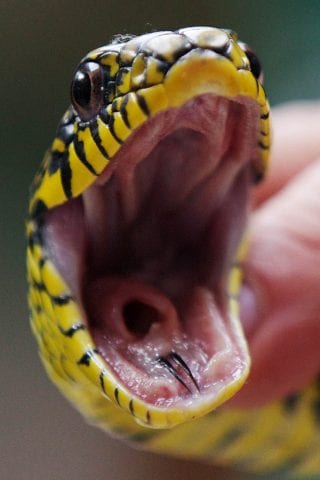 King ratsnakes are oviparous (egg laying). Their typical breeding season in the wild is from early May to late June. Females can lay between 6 – 24 eggs in one clutch. The number of eggs produced is directly related to the size of the female snake. The eggs will be deposited by the female in a safe place, for example, under a log or a hollow in a tree. It can take up to 60 days for the eggs to hatch. There is no parental involvement in raising young King ratsnakes, but the juveniles will stay in the vicinity of their hatch site for one to two years after hatching. 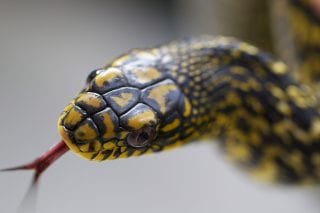 Still to be evaluated

The King ratsnake is still to be evaluated by the International Union for Conservation of Nature.

One of the biggest threats facing the king ratsnake in the wild is being captured for the pet trade and the skin trade. They are also used in traditional medicine and a popular source of food in restaurants in China.