Abyssinian ground hornbills are large land-dwelling birds, meaning they spend most of their time on the ground. They have black body feathers and blue skin around their neck and eyes. Their large beak is topped with a large bony part called a casque. Males have red splotches on their neck and around their eyes.

Abyssinian ground hornbills are large land-dwelling birds, meaning they spend most of their time on the ground. They have black body feathers and blue skin around their neck and eyes. Their large beak is topped with a large bony part called a casque. Males have red splotches on their neck and around their eyes.

Abyssinian ground hornbills live in grasslands, savannahs and desert areas across northern sub-Saharan Africa. They spend most of their time on the ground.

Abyssinian ground hornbills are carnivores. They eat small animals such as tortoises, lizards, amphibians, mammals, other birds, and insects.

They are most closely related to southern ground hornbills, who are the only other carnivorous hornbill species and also spend most of their time on the ground.

Abyssinian ground hornbills can fly but prefer to walk. They can travel long distances on the ground. They even prefer to escape predators on foot rather than by flying.

Abyssinian ground hornbills have long ‘eyelashes’, which are actually modified feathers. They help protect their eyes from dirt and injury.

They make a deep booming call that sounds like a dogs bark and the male and female sing in duets around dawn.

Abyssinian ground hornbills have a large bony part above their beak. This is called a casque and is a spongy structure made of keratin, which is the same material as hair and nails. This casque acts as an echo chamber, amplifying their calls to make them sound louder. They use these loud calls to attract a mate. 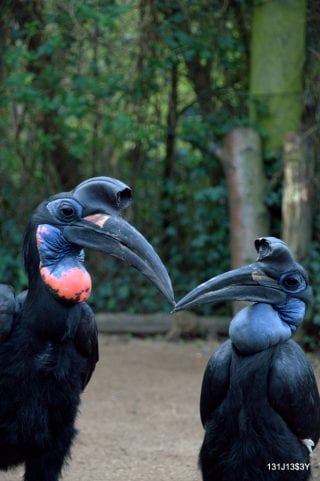 Abyssinian ground hornbills live in pairs or small family groups. Female hornbills make their nest in the cavities of trees. While incubating, the male will partially seal up the entrance to the nest with a mixture of mud, plants and faeces. Inside, the female will moult her flight feathers while the male delivers food through a small hole. Abyssinian ground hornbills only partially seal the nest, compared to the almost complete sealing of the nest done by other hornbills. The mother stays in the nest with the chick for around 30 days before leaving to help the male find food. After 80-90 days, the chick will be ready to leave the nest.

Two chicks are usually born. They are laid a few days apart and compete for food. The second-hatched chick will often die of starvation as the larger first-hatched chick gets the share of the food.

Adult hornbills can reach heights of 90-110 cm and can weigh up to 4 kg.
Females are slightly smaller than males. 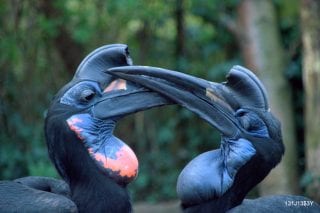 The Abyssinian ground hornbill is classified as Vulnerable by the International Union for the Conservation of Nature.

Threats facing the Abyssinian ground hornbill are habitat loss due to lands being cleared for farming and development. This results in a loss of trees for nesting. It also faces the threat of hunting by humans, who use their stuffed heads as disguises while hunting other species.

Dublin Zoo participates in the European breeding programme for the Abyssinian ground hornbill. 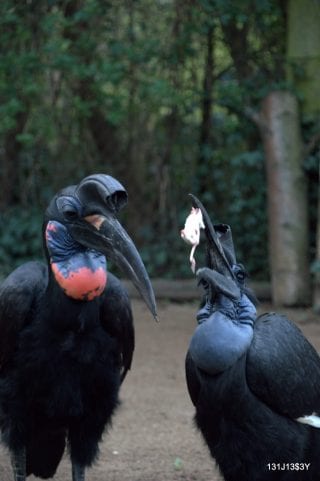