Hippos are one of the heaviest animals on earth and can weigh up to three and a half tonnes! Only elephants and rhinos are heavier. Hippos have a huge barrel-shaped body, wide mouths and large tusks. They spend most of the day wallowing and resting in or near water. At night, they leave the water to graze.

Hippos are one of the heaviest animals on earth and can weigh up to three and a half tonnes! Only elephants and rhinos are heavier. Hippos have a huge barrel-shaped body, wide mouths and large tusks. They spend most of the day wallowing and resting in or near water. At night, they leave the water to graze.

Hippos are semi-aquatic, meaning they spend time on land and in the water. They are found in shallow lakes, rivers and swamps across eastern, central and southern sub-Saharan Africa.

Approximately 55 years in the wild and in zoos.

Hippos are herbivores (plant-eaters) and mainly eat grass. They leave the water at night to graze for 4-5 hours in grassy areas near the water. While they prefer to eat near the water, they will travel several kilometres to find food if they need to. Hippos have also been observed on a few occasions eating dead animals, however, their bodies are not suited to eating meat so this is likely not a common behaviour.

The closest relative of the common hippo is the only other species of hippo, the pygmy hippo.

Hippos make a variety of sounds including honking, grunting and bellowing. They can even make sounds underwater. They are the only animals that are known to do this!

Hippos have many adaptations for their semi-aquatic lifestyle. In the water they mostly stay in shallow water, and move by walking along the water bed. Their eyes, ears and nostrils are high on their head, allowing them to breathe and stay alert to their surroundings while they are still completely submerged in the water. Despite their size, they can also move surprisingly quickly on land.

Hippos play an important role in their ecosystem. This is because a huge amount of nutrients are released into the water through their dung, which provides food for the other animals that live in the water. As they move from the water to the land, they also create ‘hippo paths’ that water can flow through during wet seasons, creating habitats for small fish during droughts.

Hippos secrete an oily red substance called "blood sweat" through their skin. This substance protects the hippo’s skin from the sun, and can also prevent the growth of bacteria that cause disease. 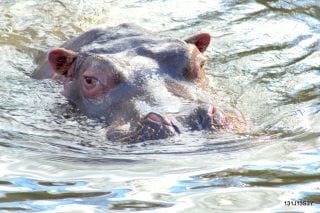 Hippos are social animals; they live in herds of about 20 to 200 individuals. The females are the leaders of the herd, while the males rest along the water bank protecting the females and calves. Young stay feeding from their mother for around a year and females tend to have young every 2 years.

Females are a similar height to males but weigh much less, approximately 1.5 tonnes (1,500 kgs). 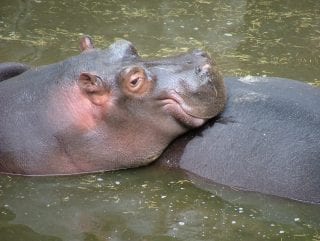 The hippopotamus is classified as Vulnerable by the International Union for Conservation of Nature. 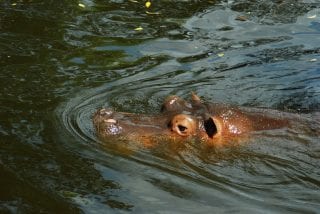