The green tree python is a bright green nonvenomous snake. They have a slender body, sometimes with small markings, and a yellow underbelly. Their tail is prehensile (can grasp), which helps them climb and catch prey. They spend most of their time in trees and can often be seen looped around branches.

The green tree python is a bright green nonvenomous snake. They have a slender body, sometimes with small markings, and a yellow underbelly. Their tail is prehensile (can grasp), which helps them climb and catch prey. They spend most of their time in trees and can often be seen looped around branches.

Green tree pythons are found in tropical forests in New Guinea, eastern Indonesia, and the Cape York Peninsula of Queensland Australia. They are arboreal (spend most of their time in trees), but also come down to the ground, particularly at night.

They are normally solitary animals, so do not have a group name.

The green tree python is most closely related to other members of the Morelia genus including the rough-scaled python and southern carpet python.

Green tree pythons have a special hunting technique. They wrap themselves around branches and dangle the tip of their tail to lure their prey, then strike out and constrict it.

In a phenomenon known as parallel evolution, green tree pythons look and act very much like the emerald tree boa of South America, to which it is not closely related. This is because although they come from different continents, their habitats are so similar that it has resulted in them having very similar traits.

The green tree python’s vivid green colouration provides camouflage for them as they rest or move through the trees. 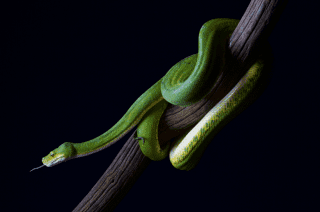 Green tree pythons are solitary, and only come together to breed. They breed during late autumn and winter. The females lays up to 32 eggs often in the hollow of a tree, and coils around the eggs to incubate them until they hatch. Hatchlings range in colour from bright yellow to brick-red; they don't turn green until maturity. 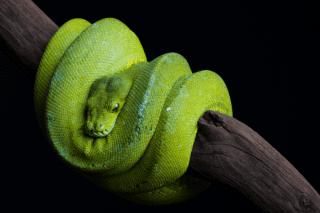 The green tree python is classified as of Least Concern by the International Union for Conservation of Nature.

There hasn't been an in-depth survey to determine the population.

The main threat facing green tree pythons is capture and collection for the pet trade.