The dhole, also known as the Asiatic wild dog, is a medium-sized canine predator with rounded ears. It has a slender body with red-brown fur, a paler underside and a black tail. Dholes belong to the same family as wolves, coyotes and foxes.

The dhole, also known as the Asiatic wild dog, is a medium-sized canine predator with rounded ears. It has a slender body with red-brown fur, a paler underside and a black tail. Dholes belong to the same family as wolves, coyotes and foxes.

Dholes are habitat generalists, meaning that they live in many different habitats. These include tropical and temperate deciduous forests, rainforests, grasslands and scrublands. In the past, dholes were widespread throughout Asia. Now, scattered populations of dholes live in Bangladesh, Bhutan, Cambodia, China, India, Indonesia, Laos, Malaysia, Myanmar, Nepal and Thailand.

Dholes live up to eight years in the wild and up to 16 years in zoos.

Dholes are hypercarnivores, meaning that over 70% of their diet comes from meat. They prefer to hunt medium to large ungulates (hooved animals), particularly deer like sambar, chital and muntjac. They also hunt birds, rodents and, sometimes, livestock.

Dholes produce unusual whistling calls to identify each other when the pack is scattered, allowing them to reassemble the pack. The sound waves produced by the whistles travel well at ground level and are easily located. Whistling allows the dholes to maintain their pack bond when moving through dense forests or grasses where visibility is low, especially during a hunt. Dholes are sometimes called ‘whistling dogs’ because of this.

Dholes have a broad variety of calls, including yaps, squeaks, screams, whines, growls, mews and chatters. Scientists believe that some of these calls have evolved to intimidate opponents and warn pack members of dangers such as tigers, leopards and humans.

Dholes have two fewer molars (large, flat teeth at the back of the mouth) than other canine species. Also, they only have one cusp on the first two molars in their lower jaw, unlike other canine species that have two cusps on those teeth. Scientists think that these features help dholes cut and eat meat faster, reducing the risk of other animals stealing their food. In fact, dholes can eat 1kg of meat in four minutes!

Dholes rarely hunt their prey to exhaustion as their grey wolf relatives do. Instead, they often use ambush tactics. During a hunt, a few dholes drive their prey towards hunting mates that are lying hidden in an ambush. Dholes also drive their prey into water to tire them out and stop them from kicking. The use of water during hunting is highly unusual for canine predators.

Dholes are very social. They live in packs of 5-10 members (although packs with 25 members have been recorded regularly). These large packs allow dholes to hunt large numbers of prey and successfully guard their large litters. The size of the pack may depend on habitat type, the amount of food available and the presence of other predators such as tigers. For example, dhole packs tend to be smaller in dense forests where their preferred prey are less abundant. The pack is led by a breeding male and female, and only they produce pups. The whole pack is involved in the raising of offspring. Everyone takes turns to hunt for, groom, guard and play with the pups.

A dhole reaches its adult size after 15 months. Females start breeding after three years in the wild. 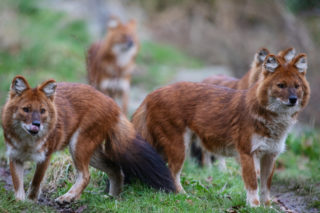 Currently, dholes are classified as Endangered by the International Union for Conservation of Nature (IUCN).

The main threats to dholes are the depletion of their prey sources due to hunting by humans and habitat loss due to agriculture, plantations and human development. They also face persecution (being harmed) by humans due to livestock losses.

Dublin zoo raises awareness of and provides education on this less well-known species and the conservation threats it faces in the wild. 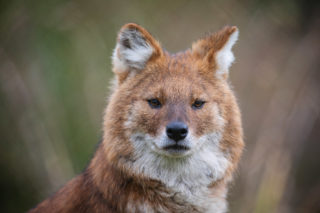 Find out all about grey wolves
Wolf

Plan your visit to Dublin Zoo

See our prices and discounts