The citron-crested cockatoo is one of four subspecies of yellow-crested cockatoo. They have white feathers and a distinctive orange-coloured crest on their head. They have pale orange ear patches and pale yellow coloured feathers under their wings and tail feathers. Other features include a dark grey beak and a pale blue ring around their eyes. Males have black eyes; females have brown eyes.

The citron-crested cockatoo is one of four subspecies of yellow-crested cockatoo. They have white feathers and a distinctive orange-coloured crest on their head. They have pale orange ear patches and pale yellow coloured feathers under their wings and tail feathers. Other features include a dark grey beak and a pale blue ring around their eyes. Males have black eyes; females have brown eyes.

The citron-crested cockatoo is only found on the island of Sumba in Indonesia. They live mainly in tropical forests or on the edges of forests.

They eat a variety of seeds, nuts, berries, buds, flowers and fruit. They will also eat food grown on farms, e.g. maize.

Near the Orangutan Forest

Citron-crested cockatoos raise their orange crest when they are excited. 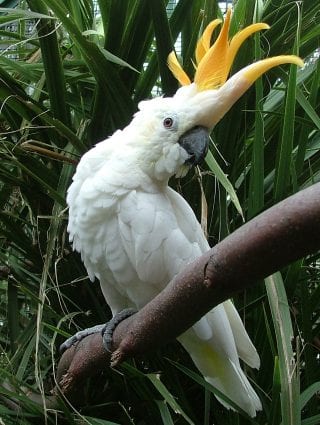 Citron-crested cockatoos live in small flocks but sometimes gather in larger flocks when feeding. On Sumba Island, mating happens from September to May. Their courtship displays include vocalising from the top of a tree and frequent raising and lowering of the crest. Nests are built in tree cavities.

The eggs are incubated for approximately 28 days by both the male and female. The chicks leave the nest approximately 10-12 weeks after hatching. 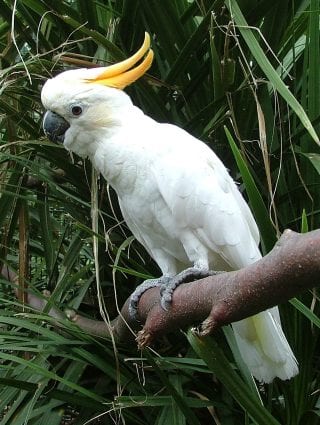 The citron-crested cockatoo is listed as Critically Endangered by the International Union for Conservation of Nature.

The main threats to citron-crested cockatoos are trapping for the illegal pet trade and habitat loss because of deforestation - Sumba Island has lost 90% of its native forest. In general, animals that are only found in one place and/or whose population is small are very vulnerable. They face additional threats from inbreeding, disease outbreaks and natural disasters.

The citron-crested cockatoo also only reproduces in small numbers, which means it takes longer for the population to recover, even when conservation measures are put in place.

Dublin Zoo currently coordinates the European Zoo Breeding Programme for the Citron-crested cockatoo. This means that we manage the breeding of citron-crested cockatoos across all European zoos.
Since 2011, Dublin Zoo has been providing funding for research on the citron-crested cockatoo population on Sumba Island. Although fewer birds are being caught for the pet trade, the population has not increased as hoped. It was believed that this might be due to fewer birds successfully rearing chicks. This research project was established to investigate why breeding results were poor in the wild in the hope that we could find ways of helping to improve the results. 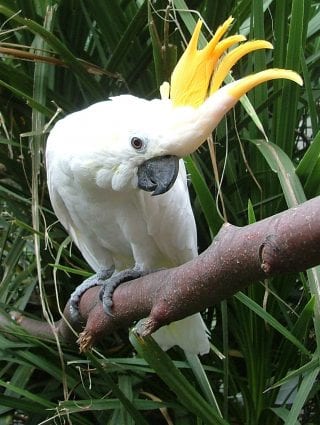 See what the animals are up to right now