Chinese stripe-necked turtle (also called the golden thread turtle) have a green body and a brownish-grey shell. Their underneath, or plastron, is an ivory shade with black spots. Chinese stripe-necked turtles are named after the yellow, vertical stripes down its face and neck. These turtles prefer a habitat close to streams, ponds and slow-moving rivers. They have webbed feet and strong leg muscles which allows them to be powerful swimmers.

Chinese stripe-necked turtle (also called the golden thread turtle) have a green body and a brownish-grey shell. Their underneath, or plastron, is an ivory shade with black spots. Chinese stripe-necked turtles are named after the yellow, vertical stripes down its face and neck. These turtles prefer a habitat close to streams, ponds and slow-moving rivers. They have webbed feet and strong leg muscles which allows them to be powerful swimmers.

Where do they live?

These turtles can be found in Asia in countries such as China, Taiwan and Vietnam.

Chinese stripe-necked turtles can live to 20 years of age.

As hatchlings, Chinese stripe-necked turtles are omnivores. When females grow up, they adopt a herbivorous diet and eat plants high in fibre. They usually eat grass, green plants, flowers and moss. Males stay omnivores but tend to eat more meat than plants. Males mostly eat small insects and their larvae.

These turtles are solitary in nature and have no formal group name.

The Chinese stripe-necked turtle habitat can be found in Zoorassic World, beside the royal pythons.

Their closest related species is the Japanese pond turtle.

Many river turtles can avoid the need to surface for air too often by using their bottom to absorb oxygen from the water. This is called cloacal respiration and is particularly important for some hibernating turtles, who spend the cold months underwater.

Basking in the sun

Like many reptiles, turtles do not generate much body heat. To get their body up to its best working temperature they often start their day by 'basking'. They will sit out in the sun and catch as much of its energy as they can.

Stripe-necked turtles are more social than many of the other species in their genus. Turtles usually prefer to be alone most of the time, and although they are not as interactive with each other as very social species like elephants, they will often bask in the same spots and tend to spend more time with other turtles.

Turtles today do not have any teeth. Instead, they rely on sharp beaks and often sharp and even jagged jawbones to break up their food.

As their nostrils are connected to their mouths, many turtles have taken to drinking water through their nose. This is common with many reptiles. Sometimes you might see a turtle stick its entire head into the water and drink without opening its mouth.

Very little is known about the breeding behaviour of this species in the wild. Like many other turtle species, the Chinese stripe-necked turtle is a solitary animal and has very little involvement with hatchlings once their eggs have been laid. However, Chinese stripe-necked turtles have been documented to bask in the sun, in relatively close proximity to other turtles of the same species.

The Chinese stripe-necked turtle reaches maturity at 15-18 cm long, which is approximately 5-7 years of age.

Hatchlings emerge after 60-150 days of incubation.

Size in length at birth 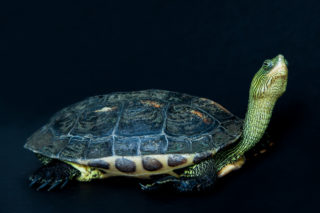 The Chinese stripe turtle has been evaluated as Critically Endangered by the International Union for Conservation of Nature.

Due to the difficult nature of surveying wild populations in their native habitat, there is no estimate on the population number of this species.

Chinese-stripe necked turtles are facing threats such as habitat loss due to poor water quality and industrial development on rivers.

Dublin Zoo promotes the conservation education of this species through the Discovery and Learning department.