The Burmese python is a large snake that is tan in colour and has dark brown patches along its body. It is one of the world’s largest snakes and can grow six metres long. The Burmese python is a constrictor snake, meaning that it kills its prey by tightly wrapping itself around it. It is an excellent climber and swimmer.

The Burmese python is a large snake that is tan in colour and has dark brown patches along its body. It is one of the world’s largest snakes and can grow six metres long. The Burmese python is a constrictor snake, meaning that it kills its prey by tightly wrapping itself around it. It is an excellent climber and swimmer.

Burmese pythons are native to Southeast Asia. They live in a variety of habitats, including tropical forests, mangrove (tropical trees found near water, usually saltwater) forests, grasslands, caves, rivers and swamps. When they are young, they spend time in the trees and on the ground. As they get older, they mostly stay on the ground.

Burmese pythons live 15-25 years in zoos. Their lifespan in the wild is unknown.

Burmese pythons are carnivores (meat-eaters). They kill their prey through constriction (tightly wrapping themselves around prey). They eat birds, reptiles and small mammals such as rats, mice, pigs and goats.

The closest relative of the Burmese python is the Indian python, of which it was previously considered a subspecies.

Burmese pythons are solitary (live alone) and do not have a group name.

Burmese pythons have stretchy ligaments in their jaws that allow them to swallow animals much bigger than their heads.

A large number of Burmese pythons are now found in Florida, USA. The Burmese python likely first arrived in Florida as part of the exotic pet trade. Over time, they made their way into the Everglades in Florida due to deliberate releases from owners who could no longer take care of them or by accidentally escaping from their owners’ homes. It is estimated that 1,000 pythons escaped from a python breeder’s facility in Florida during Hurricane Andrew in 1992. This has led to significant population declines of native animals like raccoons, possums, rabbits, coyotes and birds. As a result, Burmese pythons are considered an invasive species in this area.

Burmese pythons detect scents with their tongues, which they flick out to do so. Their tongues are forked, allowing them to tell what direction scents are coming from. 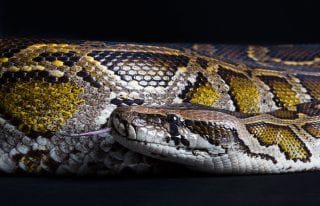 Burmese pythons are solitary animals (live alone) and generally only meet during the breeding season. Females lay clutches of up to 100 eggs, which they incubate for two to three months. To keep their eggs warm, they continually contract their muscles (or shiver). 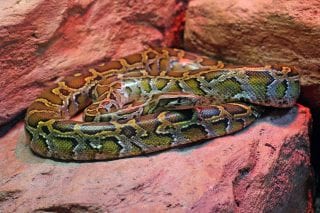 Burmese pythons are classified as Vulnerable by the International Union for Conservation of Nature (IUCN) as their population in their native range in Asia is decreasing.

The main threat faced by Burmese pythons is poaching (illegal hunting). They are hunted for their skins, as food and for the illegal pet trade. Habitat loss due to agriculture also poses a threat to the python by eliminating its prey and leaving it more vulnerable to capture by humans.

See our prices and discounts