Where do they live?

The African spurred tortoise can be found in many countries in Northern Africa such as; Burkina Faso, Central African Republic, Chad, Eritrea, Ethiopia, Mali, Mauritania, Niger, Nigeria, Senegal and Sudan. In these arid regions of the Sahara desert the African spurred tortoise will burrow into the ground to submerge itself into areas of higher moisture. They will spend the hottest part of the day in these underground burrows. Sometimes these burrows can be 15m deep and 30m long.

The African spurred tortoise is a herbivore and eats a high fibre diet. In their native habitat, they would eat an abundance of grasses, flowers, green plants and cacti.

African spurred tortoises usually lead a solitary life, but come together during the breeding season. However, a group of these tortoises is called a creep.

During the dry season, the African spurred tortoises, like many tortoise species aestivate; they dig a burrow for themselves to sleep in. This is a lot like how some animals hibernate through harsh winter months, but near the equator, it's the dry season they avoid.

One shell for all occasions

Despite what cartoons would have you believe, turtles can't climb out of their shells. The scales (scutes) are made up of their fused ribs and spine. All of the bone is also covered in a thick layer of keratin.

The 'spur' in their name comes from the spikes, or spurs, that can sometimes be seen on their hind legs. They also have some long pointy scales on their front legs, which are used to block off the front opening of their shell and to help them dig.

African spurred tortoises are the largest mainland tortoises in the world. There are two kinds of tortoises that can grow larger than them, but they both live on islands: the giant Galapagos tortoise and the Aldabra giant tortoises.

Why do tortoises move so slowly?

African spurred tortoises move slowly to conserve energy. They can survive for weeks without food when they need to. This is very important for animals that live in the largest desert in the world.

The breeding season usually occurs from June until the following March. The female will dig up to five nests before she decides which one is suitable for her to lay her 15 – 30 eggs. A female will lay an egg every three or so minutes until the entire clutch has been laid. She will then cover her eggs with sand and soil and they will incubate for 8 months before they hatch. Like most other reptiles the African spurred tortoise has no involvement with raising their young.

Eggs hatch between 4-8 months, depending on the temperature of the environment.

Approximately 17 eggs per clutch but they can have as much as 30.

Hatchings can weigh 37g at birth. 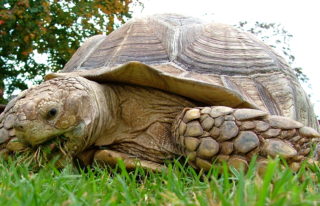 The African spurred tortoise is classified as Endangered by the International Union for Conservation of Nature.

Due to the difficult nature of surveying wild population numbers, the International Union for Conservation of Nature can only estimate there are approximately 400 individuals left in the wild as of 2020.

Competing for grass with farm animals, these tortoises have a hard time getting enough food to survive on. Many tortoises have been taken from the wild for the pet trade; some countries are impacted more than others by this.

Dublin Zoo assists conservation projects for animals that share habitats with African spurred tortoises. The protection of these species and their habitats also benefits the tortoises; helping one also helps the other. This term is called an umbrella species. 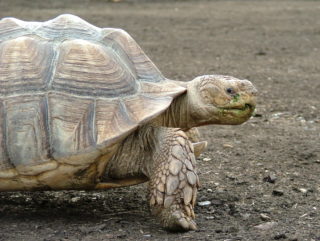