The Indian peafowl also called the common peafowl or the blue peafowl is a regular sight at Dublin Zoo.

Peafowl are among the largest of all birds that fly. The beautiful feathers that cover the tails of a peacock are 1.5 metres long – longer than the bird’s body – and can be displayed in a spectacular fan of brilliant colours. These long feathers grow from the bird’s back, not the tail. 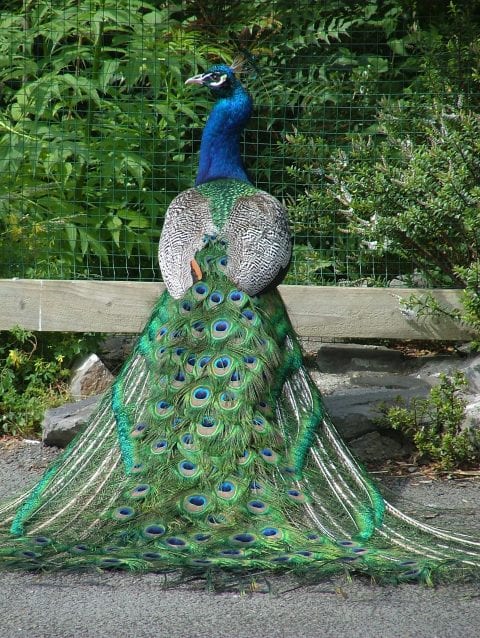 The peacock’s fanned tail feathers spread across its back and reach the ground on each side. One peacock has from 100 to 150 long tail feathers. Each feather shimmers with green, blue, and gold and a pattern called an eye-spot.

Why does he have such a magnificent tail? To attract a female! Peahens choose their mates based on the appearance of the peacocks’ tail feathers. The peacock struts in front of females, showing off by vibrating his feathers.

Peahens display more modest colours than peacocks, with mostly brown on their back and a white belly. This colour makes the females inconspicuous when they nest on the ground in bushes and in long grasses. Females don’t have long tail feathers, but they do have a little crest on their head and green neck feathers. 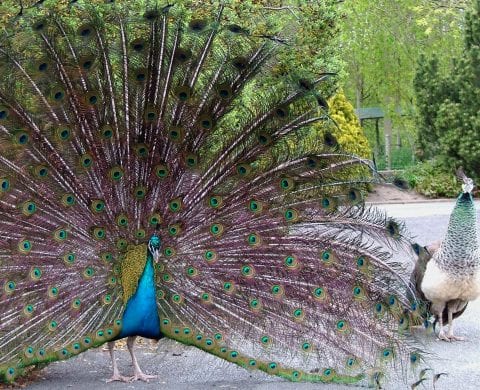 Indian peafowl are native to India and Sri Lanka, in South Asia. They’ve been introduced to other countries, where many are kept in parks and zoos. In the wild, they usually live in open forests and woodlands near streams or rivers. Some also live in cultivated areas.

Peafowl are big birds. They are rather weak fliers and spend most of their time on the ground looking for food and nesting places. During the night they roost high up in big trees to be safe from predators.

They eat seeds, fruit, insects, and small animals like worms and snakes.

The male doesn’t look after eggs or the chicks. Each peahen generally lays from three to five eggs. She incubates them until they hatch about a month later. The chicks hatch ready and able to follow their mother right away. She leads them to places where they can find food. The chicks mimic their mother as she pecks at food, quickly learning what and how to eat.

Book your tickets here to visit the resident peafowl at Dublin Zoo.